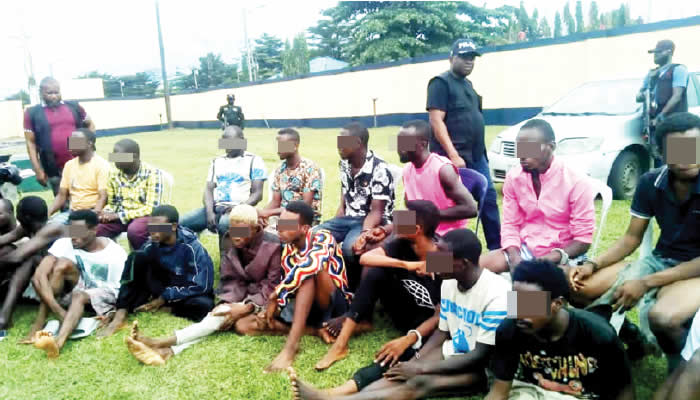 The police in Rivers State have smashed a child trafficking syndicate and rescued a five-year-old girl sold for N600,000 to an undisclosed buyer in Imo State.

The child was said to have been kidnapped from Omagwa community in the Ikwerre Local Government Area of Rivers State after she went missing on May 20, 2022.

The state Commissioner of Police, Friday Eboka, disclosed this while parading 30 suspects arrested for various crimes at the police headquarters in Port Harcourt on Wednesday.

Eboka said the suspects would be charged to court at the conclusion of investigations.

The CP said, “On May 20 this year, a lady called Peace Emmanuel reported that her five-year-old daughter was missing. The case was reported at the Omagwa Police Station.

“But later, it was transferred to the Commissioner of Police Monitoring Team at the Forces Avenue, Port Harcourt. They went into investigation and eventually, it was discovered that it was her sister who arranged to steal her child and she eventually sold the child to a lady in Imo State for the sum of N600,000.

“So, we went and we were able to rescue the little girl; we also arrested two suspects. The major suspect’s name is Ejike Edith, aged 30; she also mentioned others who did that crime with her. They are Prince Ugwu and Nkiruja Samuel, 26. These suspects were also arrested and are here with us. But the person who received the baby is in Imo State and we are making arrangements to ensure that he is arrested to face the law.”

He said men of the command also busted a kidnappers’ den in a forest in Kaani community, Khana LGA of the state, rescuing victims and recovering several AK-47 rifles used by the suspects.

“Similarly, on May 27, the same anti-kidnapping unit also arrested one Messiah Wisdom. The suspect would invite girls to his house, drug them, make love to them, video them and threaten them to bring the sum of N1m or risk the chance of the video going viral.

“This morning (Wednesday), we also got information that some people were looking for AK-47 rifles to buy. We worked on that piece of information, developed it and sent our men to go and pose as those wanting to sell the rifles.

“They promised that when we follow them to the river, they would give us the balance in the river. But these two people were arrested and the money was recovered.