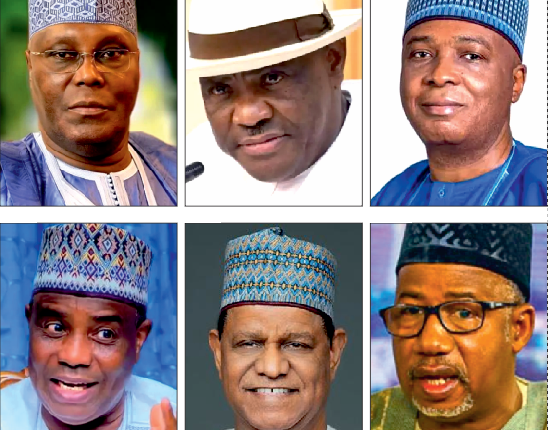 PRESIDENTIAL aspirants on the platform of the Peoples Democratic Party (PDP), after months of campaigns from one state to the other in search of the support of the party’s 3,700 delegates ahead of the party’s Presidential primary scheduled for May 28-29, 2022, are now ready to do battle for the opposition’s party’s much coveted 2023 presidential ticket.

The Newswriter  gathered that most of the presidential hopefuls are now busy lobbying party leaders and other prominent stakeholders for support in pursuit of their aspirations. “The underground politicking has increased just as the open campaign is subsiding. The serious ones among the aspirants have reached out to the delegates who will be voting at the primary election. Now, they are wrapping up their activities by talking to the leaders and stakeholders in each state,” a source said.

Seventeen chieftains of the opposition party paid N41million to obtain the expression of interest and nomination forms of PDP. Upon the closure of the sales of the forms, the party proceeded to screen the aspirants. The presidential screening committee of the party headed by Senator David Mark attended to all the aspirants, and at the end of the process, 15 of them were cleared while two were disqualified from the race.

The two aspirants disqualified by the committee, who also had their disqualification upheld by the party’s appeal panel earlier this month are former lawmaker, Cosmas Ndukwe, and a US-based medical doctor, Nwachukwu Anakwenze. The party also announced that the two aspirants will not be refunded their N40m fees paid for nomination and expression of interest forms.

With the decision of the party to shun its tradition of zoning the presidency to a particular zone in line with its rotation principle, many pundits are now quick to predict that the race for the 2023 presidential ticket of the opposition PDP is among Atiku, Wike, Saraki and Tambuwal. To this school of thoughts, these four aspirants have done the most work towards canvassing for the supports of party leaders and delegates in the past months.

In spite of growing indications that the party’s leadership may have resolved to produce a northern presidential candidate owing to its belief that it can only unseat the ruling All Progressives Congress (APC) with a candidate from the north, Governor Wike of Rivers state, who has emerged as the leading aspirant from the southern zone, is still rated by many analysts as someone who can pull a surprise and alter the party’s plan during the primary election.

“The thinking in the PDP today is more about winning the next presidential election and displacing the APC from Aso Rock and not fulfilling an age long tradition. The APC used the same gimmick in 2025 when it picked Buhari from the north and defeated the PDP banking on the votes from the region. The PDP leadership has weighed all the options and we are going for what is best for the party in the current circumstance,” a party leader said.

Our correspondent also gathered that there is a ground swell of opinion within the party that former Vice President Atiku Abubakar and ex-Senate President Bukola Saraki are the best options among the numerous northern presidential aspirants. While Atiku’s supporters are touting his vast political networks across the country as what PDP needs to unseat the APC, Saraki’s promoters are quick to point to his dual origin in both the north and the south.

“With Saraki, we will appeal to both the north Saraki’s and the southern zones. He is from Kwara in the northern region and a Fulani at that. But his Yoruba ancestry can also not be wished away. With that, he is a candidate the south can warm up to. The party leaders are not blind to all these attributes and what the PDP can gain by choosing Bukola as its candidate from the north in 2023,” our source added.

Recall that some weeks back, a group of party elders from the north had announced Saraki and Mohammed as the preferred northern consensus candidates. The party leaders said any of the two would be supported by the people of the region. Expectedly, Atiku, Tambuwal and many other northern aspirants rejected the position of the elders and dismissed it as unrealistic.

A founding father of the party, he served as Vice President for eight years on the platform of the PDP. He was the party’s candidate in the 2019 election. He ran against and lost to incumbent President Muhammadu Buhari. He is believed to be very popular in the southeast. His northeastern zone too is expected to go with him all things being equal.

“This time around is different; our journey will not end at the poll; we will get to work and rescue Nigeria. I invite every Nigerian to join me in this mission to save our dear country. Nigeria is a land of possibility. There is no challenging background that will make any Nigerian give up. I am a living witness to what is possible in Nigeria.”

“Under my presidency, I want to focus on five key areas: the unity of Nigeria, security, economy, education and devolving more resources and powers to the federating units. I have never been this optimistic, and with your support and God’s grace, we will get to the promised land,” Atiku had said with optimism at the declaration of his aspirantion.

At 75, many believe this may be his last shot at the presidency, an ambition he had been nursing since 1992. Many party stalwarts see him as the best option for the PDP if the party is desirous of defeating any of the heavyweights currently jostling for the ticket of the ruling APC. “It is only an Atiku that can defeat someone like Asiwaju Bola Tinubu of the APC. PDP needs Atiku now more than ever before,’ a source said.

His famed huge war-chest is also being adduced as a reason for his candidature by his supporters. “PDP is not the ruling party. We need someone who can finance a presidential election with little or no support,” a party source said. In recent times, he has made considerable overtures to the delegates in the southwest and north-central of the country. He remains a frontrunner for the ticket.

But claims in some quarters that his candidature is feared by some leading chieftains of the party, especially in the north, is an albatross to his aspiration. The Nation gathered that his failure to emerge as one of the proposed consensus aspirants of the north is due to this fear. His unending face-off with some of the governors of the party since 2019 is also a threat.

He prides himself as the only presidential aspirant who had never left the PDP since 1999. He was elected as a two-term Executive Chairman of Obio Akpor Local Government Area from 1999 to 2007. He was appointed Minister in July 2011. Wike resigned before finishing his term to campaign for Governor of Rivers State. He won the election and was re-elected in 2019. He has emerged as the frontrunner among aspirants from the south.

He is one of the contenders who had campaigned and reached out the most. According to his campaign team, he has been to almost every state of the country to canvass for votes. He is almost the most talked about aspirant as at today. Many political observers expect him to pull a surprise at the primary election, especially on the strength of the pro-zoning agitation within the party which he championed.

Amidst allegations that he is actually positioning himself for the vice-presidential ticket of the party, the Rivers State governor daily vows that he will not settle for anything other than the presidency. His financial strength and famed political spread are to his advantages. He will pocket the votes of delegates in Rivers State and do very well in the south-south zone.

We Need More Time To Complete Our Projects- Giadom