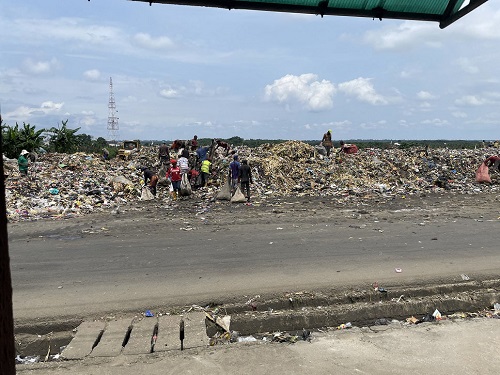 Efforts of the Rivers State government and Africa Development Bank to deliver safe, portable drinking water to millions of residents of Port Harcourt and adjoining cities could be jeopardised by the siting of a waste dump in its vicinity

Investigation revealed that the water project will produce 330,000 cubic meters of potable water for about two million residents of Port Harcourt and Obio-Akpor LGAs of the state, through a 496-kilometre network of rehabilitated and upgraded pipelines.

The state government’s strange choice to approve the use Njemanze/Okoroma road as a waste receptacle, just a few meters from the site, has raised concerns about the quality of the water from the project.

“You don’t have to be a scientist to know that it is not safe for a waste dumpsite and water source to be in proximity; it is a no-brainer that the water that will be produced from the site will be harmful to humans and even animals,” a business owner in the area said.

Ogbonnaya Nwuju, a lawyer and country chair of the Civil Monitors International, described the move as confusing given the absence of proper study to determine the effect of the decision on citizens and businesses in the area.

Various sources, including health and medical officers, say that sitting water sources close to dumpsites have far-reaching effects on water and the quality of the lives of those living in the area.

A study carried out in parts of the FCT Abuja, by National Centre for Biotechnology Information (NCBI), and published by the US National Institutes of Health’s National Library, revealed that open dumpsites could “be a source of microbial and toxic chemicals.”

The report stated that it can also pollute hand-dug wells, and poses “serious health risk and leading to the destruction of biodiversity in the environments.

The process creates health hazards, soil and water pollution, and offensive odours, which increase with an increase in ambient temperature levels.”

Although no competent officials of the state or PHALGA have spoken on the situation, hopes that the constant stream of waste trucks/compactors would soon ease were crushed at the weekend by a rumour that the state has no immediate alternative to the current site.

“Rather than shut this site down, the plan is to erect a perimeter fence to block the waste from spilling into the road and compounds close to the site,” a source disclosed.