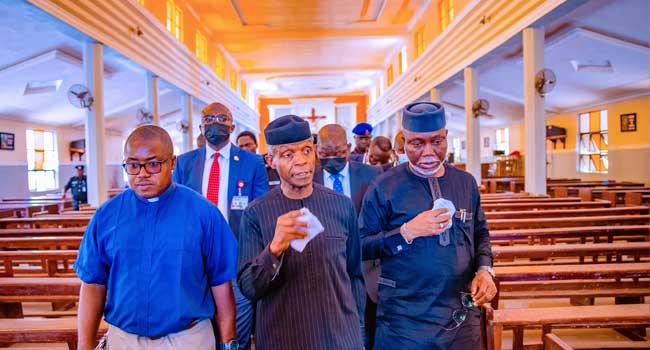 The Federal Government has disclosed that last Sunday’s attack on St Francis Catholic Church, Owo, Ondo State, by gunmen leading to the death of worshippers has been linked to the Islamic State of West African Province (ISWAP).

The Minister of Interior, Rauf Aregbesola, briefed State House Correspondents at the end of the National Security Council Meeting presided over by President Muhammadu Buhari.

The minister who briefed alongside Inspector-General of Police, Alkali Baba Usman; said the police has been ordered to go after the perpetrators of the act and bring them to justice.

According to him, the imprint of ISWAP has been found on the scene of the attack, vowing that they will be brought to Justice.

According to Aregbesola, ISWAP’s aim is to put Nigerians against each other by this attack to make it appear as an ethno-religious war.

The IGP on his part also hinted that 10,000 additional police officers will graduate next month to be added to the security architecture immediately.

He also said the police will be leading other security agencies to monitor the June 18, 2022 elections in Ekiti State.