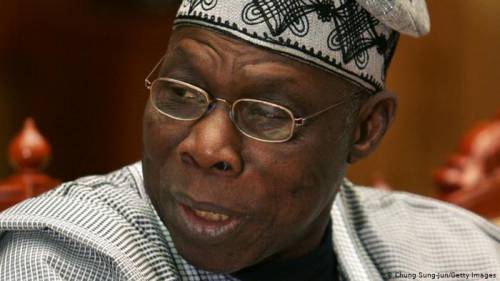 Former Nigerian President, Olusegun Obasanjo, has said his choice of a running mate ahead of the 1999 presidential election, was one of the costly mistakes he made.
Atiku Abubakar, the Presidential candidate of the Peoples Democratic Party was vice-president to Obasanjo in 1999, and had a turbulent moment with Obasanjo, culminating in both of them separating into different political parties.
Olusegun Obasanjo Getty Images

Eyeing the 2023 presidency after failing on at least two occasions, Atiku has already picked Delta State Governor, Ifeanyi Okowa, as a running mate and could be a strong contender in the next year’s election.
Obasanjo’s comment coming at such moment suggests the former president is still not a fan of Atiku’s candidacy although he did not expressly mention Atiku’s name in his speech.Obasanjo, who spoke on Saturday during a leadership mentoring session with selected students in Abeokuta, Ogun State, said the mistake was one he made in good faith but was saved by God.
The event was organised by the Students for the Advancement of Global Entrepreneurship (SAGE).
The former president, while interacting with the students during a question-and-answer session, said he had many mistakes, which he could describe as genuine mistakes in his life but God made him to overcome them.
He said, “One of the mistakes I made was picking my number two when I wanted to become the President. But because it was a genuine mistake, God saved me.
“The second one was when Abacha wanted to arrest me. When he wanted to arrest me, I was told by the American ambassador that they would arrest me and that America had asked that I should be given asylum. I said ‘No’. It could have been a mistake because I could have lost my life.
“I will say there are many things that could have been a mistake but God saved me from them all.