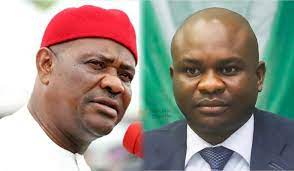 Following the mayhem at the PDP secretariat Rivers State, Gov. wike has accused  Hon.Farah Dagogo, as sponsor of the incident. He accused Hon. Danagogo of Hiring cultist to bridge public peace and descended on party officials at the State Secretariat over political issues that has to do with PDP forth coming Primaries in the State. Never the less, He has Called on the Commissioner of police to bring Hon. Dagogo and his cronies to book over the incident. Meanwhile reacting to the incident, Hon. Dagogo through his media aid Ibrahim Lawal Said he was not involved in the incident, and did not send anyone to disrupt the screening exercise at the party secretariat, that he is a Governorship aspirant and has nothing to do with National and State house of assembly screening. According to Lawal Gov wike is affraid of Hon. Dagogo`s Popularity that is roaring like the harmattan fire. He further accused wike of finding all means to stop Hon. Dagogos Governorship Screening, as he has his preferred candidate, one Mr. Fubara Similari, who recently retired as the accountant general of the State. Claiming that Gov. Wikes directives for the arrest of Dagogo violates the spirits of section 14 and 33 of the 1999 constitution as amended. he further called on the inspector general of police and the Rivers state Commissioner of police Eboka, not to heed to the directives of Gov. wike in this circumstance, but if the Commissioner of police considers it important, he should invite Hon. Dagogo to hear his side in a civil manner. Saying that ” Farah dagogo is a respectable and Law Abiding federal law maker , representing the people of Degema/Bonny Federal Constituency in the House of Reps.”

THE TITANIC: RMS Titanic At 100 Years