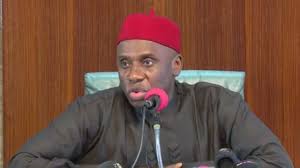 The Supreme Court has dismissed an appeal by a  presidential aspirant on the platform of the All Progressive Congress (APC) and former Governor of Rivers State, Chibuike Rotimi Amaechi to stop  the state Commission of inquiry from probing him over alleged N96 billion fraud and fraudulent sales of valued assets belonging to Rivers State.
The Supreme Court in a judgment delivered on Friday consequently ordered Amaechi to appear before the Justice George Omekeji Commission of Inquiry set up by the Rivers State Government to investigate his 8-year tenure as governor of the state.
The apex court dismissed Amaechi’s appeal where he had asked for order of the court to
prohibit his successor,  Governor Nyesom Wike from investigating his 8-year tenure as executive governor of the state.
Justice Adamu Jauro who read lead judgment in the Amaechi’s suit held that it lacked merit, ought to be dismissed and was subsequently dismissed.
The Supreme Court affirmed the judgments of the High Court of Rivers State and that of the  Court of Appeal which had earlier dismissed same suit for want of substance and merit.
The apex court also slammed N1M fine against Amaechi.
With the final decision of the apex court, Amaechi will be made to appear before the Commission of Inquiry headed by Justice George Omekeji to give account of how N96B was allegedly withdrawn from the Treasury of the state government and how it was expended.
The Commission of Inquiry inaugurated by governor Nyesom Wike is to look into the lawful or otherwise of the alleged sales of valuable assets of the state.
The listed valuable assets are Omoku Gas Turbine, Afam Gas Turbine, Trans Amadi Gas Turbine, Eleme Gas Turbine, Olympia Hotel and the award of contract for the execution of Mono Rail Project.
previous post